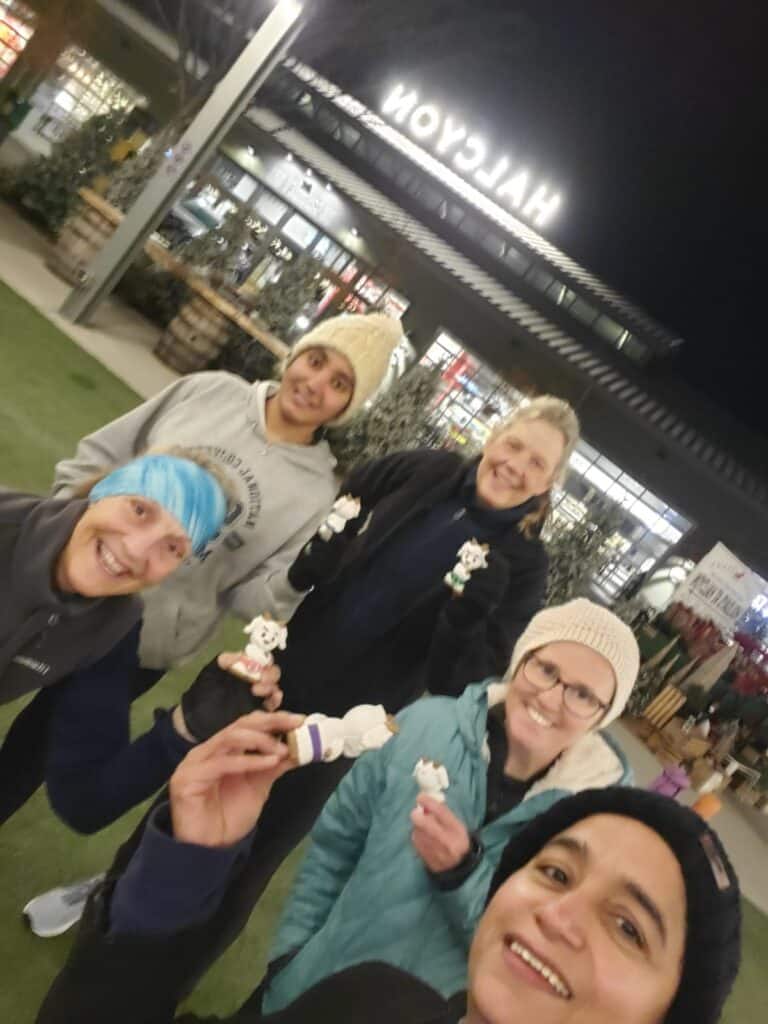 Before I left the house my mini-van required a defrost, so dang cold outside! But, the frost did make for some pretty sparkly surfaces! Our 5 pax arrived on time and we got started without delay to get warm. The warm up included running big lap and some arm claps and arm circles. Nothing fancy, we then jumped right in to the games at hand.

Our first game consisted of playing 5 Second Rule. One pax was the caller and called the question for another pax to answer, “name 3 farm animals”, “what are 3 medical procedures?”, etc.   We all did a plank excersise until we made a full round and every pax had the opportunity to answer a question. Once we finished one round the next pax was the caller and a new excersise began. We did shoulder taps, left arm plank, right arm plank, glute bridges, and something else that I don’t remember right now haha.  Breezy finished this game with the most points (Oh yeah, if you answered the question within 5 seconds you won a point!)

Next game, Who’s the Goat?!?  Every pax was given a squishy goat to be used for voting for who they thought was the greatest of all time at whatever action item was called. Every pax got a chance to show their skills at various things like sounding like a police siren, shaking their booty, walk/running with their legs crossed, making up a song about tin cans, etc!  The conclusion was that we are all pretty dang amazing at a lot of things but we still were tasked with voting for one.  As each pax demonstrated their superior abilities and the  the other pax laughed and did arm excersises; arm raises, bicep curls, tricep extensions, bent over rows, and possibly a couple others that I am forgetting. Oh, we also did a planking contest and Titaniaum retains her title as the GOAT!

For our final game we all gathered in a circle and were given a number.  One pax hit a balloon and called a number and the other pax had to run to hit the balloon, if they missed they had to do, ” a couple burpees”.  While waiting for the number to be called we did leg excersises, alternating side squats, lunges, squat hold, calve raises, etc. I think we all had to do a couple burpees!

We tallied our points and Titanium and Hoops tied with 6 points!

I totally forgot about cool-down stretches with all the excitement!  My COT was just an expression of gratitude for the amazing women that make up our FiA Alpha group! So thankful for every woman who contributes to the positive energy of this group!

Big thanks to Sweet Treat for being the photographer this morning!