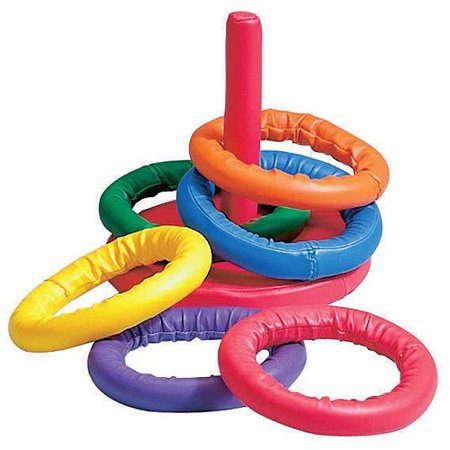 It was overcast and threatening to rain, but we set up our Ring Toss Work Out on the grass anyway.

We started with an Indian Run warm up around the big pavilion. Watch out for those cross country runners at Fowler Park!

I started the 90’s Alternative Road Trip play list in honor of my son getting his driver’s license.

Next we did an ALARMS style workout using the ring toss game. Six cones in a circle in the middle. Each one assigned to one of the letters in ALARMS (Arms, Legs, Abs, Run-AKA Cardio, M-exercise, and S-exercise. Everyone got their own ring. Mats were in a larger circle around the cones. From her mat, each PAX tosses the ring trying to land it on the cone. If she misses the cone, she does the listed exercise 30 times. If she makes it, she only does 20. Guess how many rings landed ON the cone? At one point, we reduced the expectation that if you just touch the cone with your ring, you only have to do 20 reps.

Here are the exercises for the 6 cones. We did 4 rounds of the Ring Toss Work Out.

We had time for one more round of the Ring Toss workout – choose your favorite exercise from the list.

Then we stretched, had some quotes about driving (in honor of my son getting his driver’s license) and Name-o-rama!

“Baseball is like driving, it’s the one who gets home safely that counts.” – Tommy LaSorda

“The best car safety device is a rearview mirror with a cop in it.” – Dudley Moore