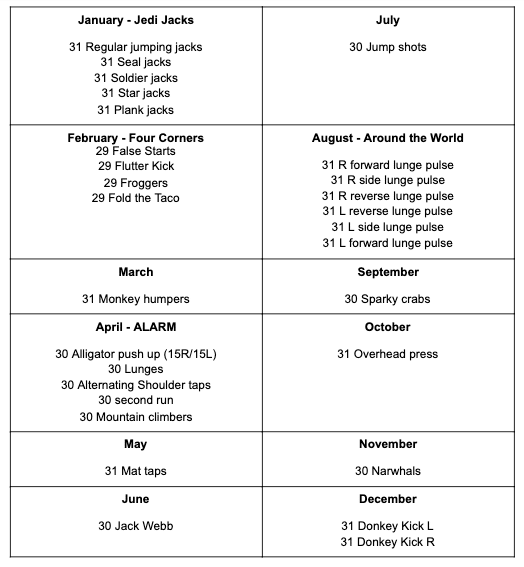 Last FiA Alpha workout of the year! 10 PAX came out to finish the year strong….and say good riddance to 2020! We went with a year in a glance theme by covering each month and doing one rep for each day of the month….a challenging workout for a challenging year!

January – Jedi Jacks: I actually don’t love these, but Tex introduced them to me and they fit the “J” need for January, so Jedi Jacks it is.

February – Four Corners
Of course it was leap year this year, so we had one extra day = one extra rep in February
29 False Starts (plank position, jump in, jump out, then 2 plank jacks): these were absolutely terrible!
29 Flutter Kick
29 Froggers
29 Fold the Taco (dying cockroach) – not nearly as great as the taco part sounded lol

June
30 Jack Webb (push up on knees, kneel, air press, repeat): Uhaul seemed to like these? “Like” may be a strong word, but she was at least intrigued lol

July
30 Jump shots: if I didn’t know better, I’d say Tex was the start point guard of her HS basketball team. Great form and endurance! Titanium sunk each and every one of these, while Miyagi thought these should count for 2 each…..we did foul shots-1 pt each 😉

October
31 Overhead press: I love every time Sushimi gets to use his weights during a beatdown…they sound like maracas and make me smile! 🙂

November
30 Narwhals (one legged glute bridge): Now these Sushimi could get on board with….although they weren’t as fun as the Narwhal in Elf!

COT – This year has been filled with a lot of challenges, but there were also things to celebrate. We shared some positive things that come out of 2o2o – births, new jobs, a slower pace, getting to work from home, weddings, and growth in our tribe! We are so thankful to have an incredible group of ladies that come out to get stronger, build community, and grow our minds, bodies and hearts.

2021 is just around the corner – don’t forget to invite a friend so they can join in on the fun too!