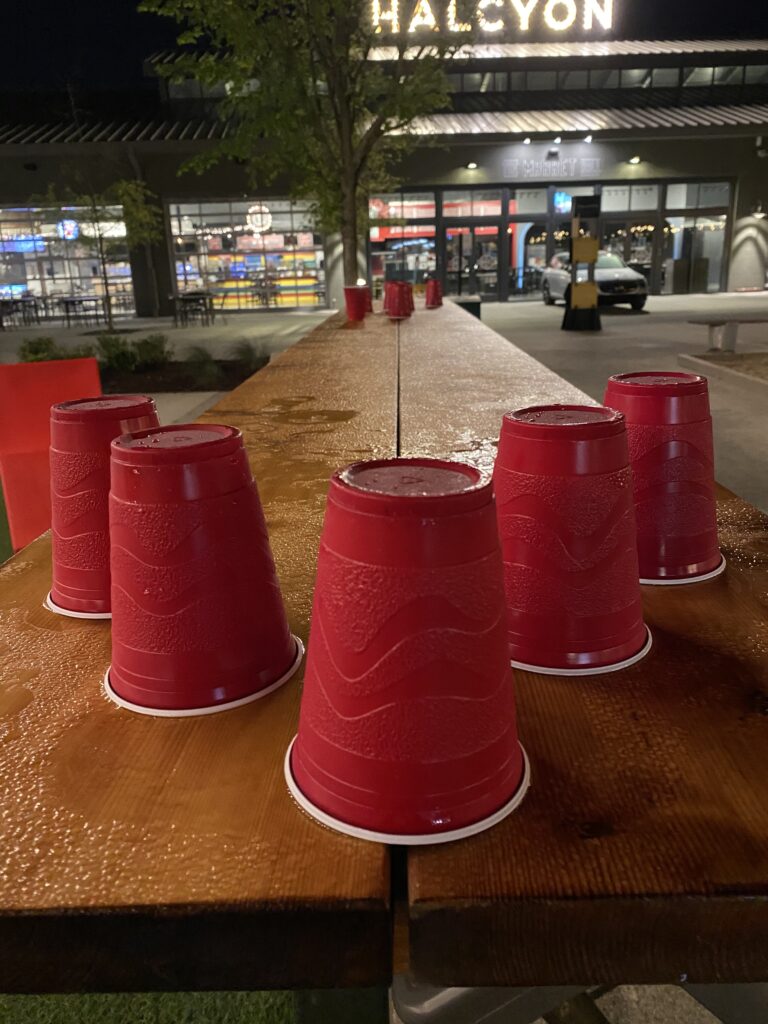 This workout was 100% inspired by my recent vacation to Jamaica! I couldn’t bring ya’ll with me to Jamaica, so I brought some Jamaica to you by sharing some of the fun Nacho (F3) and I had poolside.

There wasn’t much of a warm-up (wah wah)…I was so excited to jump right into our games!   So, first game up: FLIP CUP!

We divided into 2 teams, a team of 5 and a team of 6 and lined ourselves up on one side of the green. Six cups were lined up and awaited each of the teams on the other side of the green on a built in bar table.  Each cup was filled to the first line with water. When I yelled “go” one FiA from each team ran to their first cup, drank the water, then flipped the cup. If you haven’t played flip cup before (we had a couple of those) you slightly hang the cup off the ridge of the table and flick the bottom of the cup with your finger, trying to flip it over onto it’s brim. As one FiA from each team was doing that, the rest of the team was performing an exericise. Once the FiA flipped the cup, she ran back to her team and the next FiA went to flip their cup while the rest of the PAX moved onto the next exercise. First team done planked for the PAX; losing team did 10 burpees!

The next game up was a PUSH UP CHALLENGE! We partnered up and did a Dora – as one FiA was doing pushups, the other FiA was taking a lap around the green. First to 100 wins! This was an intense way of getting in a lot of pushups in a short amount of time. The winning team planked for the PAX while everyone else did 8 burpees!

Last game was a SCAVENGER HUNT! We split back into our original teams and each team needed to go run to find the item on the list, take a picture with the item & then run back to the mats to do the noted exercise for that item. No FiA left behind…so teams could can proceed until all FiAs are ready to go. The first team with all items found, pictures taken and exercises completed wins! Here were the items & exercises:

Winners planked for the PAX and then everyone did 5 burpees together once all PAX returned to home base.

We had about 8 minutes left so we did a round of FiA’s choice abs and then called it a day with a COT inspired by no other than Bob Marley who was a native Jamaican: “Don’t worry about a thing, because every little thing, is gonna be alright.” And when it’s not, we have a God that loves us and FiAs to care of us.