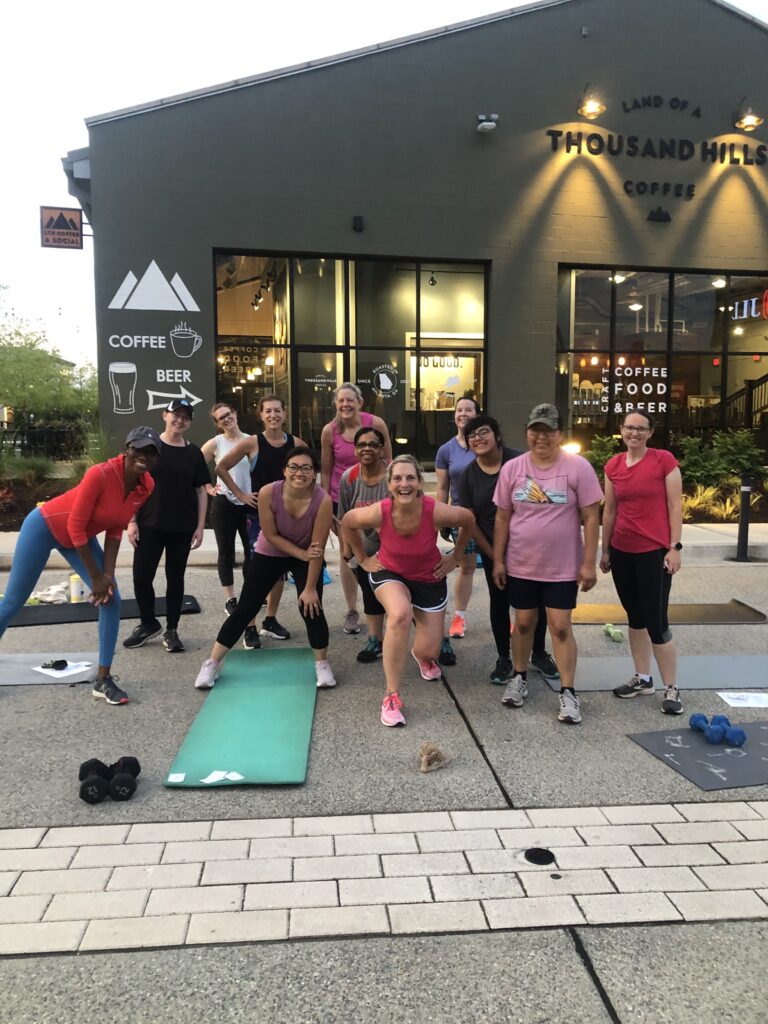 We finished out our impromptu “Game Week” with a Funday Friday!  Relay Races, Tic Tac Toe, Trash Ball, and a card game. All fun, all made up, all crazy – this is fun with our Fia friends.

We started out with some stretches to wake our muscles up then jumped to it.

First up, was a relay block game.  We split into 4 teams and each team had 11 blocks with numbers on them. Each number corresponded to a different exercise. Each team had to pick a block, perform the exercise on the block and then run to the other end of the parking lot where a cone was placed to build a tower with the blocks. One by one and block by block our tower was built and we worked for it! Here were the exercises on the blocks – thank goodness we didn’t have to do ALL of these….but my group got lucky and got the BURPEES! wah wah…

The winning team got to plank for the PAX while all the losing teams had to do 5 burpees.

Next up was tic, tac, toe.  We re-counted off splitting our group into 2 teams. Papers were placed down the parking lot in a 3x3x3 grid, making the spaces where the X’s and O’s can go.  One team had X’s and the other team had O’s. Each X and O had an exercise written on it so the team had to do that exercise before being able to run and put their X or O on the board. It was not at all windy today, but as luck would have it, a small breeze picked up just as we were placing all our Xs and Os on the board…..go figure!  Either way, the O’s beat the X’s, so the X team had to do 5 more burpees.

Trash ball was next – you might be asking yourself what Trash Ball is. Don’t bother googling it, because this one was completely made up too.  30 different exercises were written on different half sheets of paper, they were all crumpled up for each PAX to have 2-3 wads. We split into 4 teams and then got the instructions:
Step 1 – throw your wads of paper around the parking lot
Step 2 –  pick up the trash: when I called “go” each FiA had to pick up the paper one at a time and run it to a different groups station. Once all the paper was picked up and distributed to the teams, we went on to step 3.
Step 3 – do the exercises: Each team gathered all the wads of paper that were placed by their station and opened one by one performing the exercises in cadence to 10. These were the exercises written on the papers…it was luck of the draw which exercises were given to your team to do:

We had a 3-way collision as we were scurrying around to pick up the papers. Flip Flops and I collided, then we bumped into Honey Bear and we all ended up on the ground for a hot minute. We’re all tough and stuff though, so we were all okay, praise be! lol Losing teams once again did 5 burpees.

Last game was a card game I recycled from Christmases ago – “Naughty or Nice”. It went well the first time we played it, but today was a disaster.  My 6:00am brain must have not been communicating well because there was mass confusion! Let’s see if I can explain it better in my backblast.
All face cards were taken out of the deck and each remaining card was labeled with a red N or a green N on it.
Green N – Nice
Red N – Naughty
I dealt all the cards out – each PAX got 3-4 cards and we then split into 4 groups.

Step 1: pick a card from the FiA next to you (we did this “train” style, 1st FiA picks from the 2nd Fia, 2nd from 3rd, 3rd from 4th)
Step 2: last FiA in your group discards one of her cards
Step 3: Each FiA performs the exercises in your hand

We all weren’t on board with this game and we were running out of time, so we all just did 5 burpees since we all essentially lost, then we moved on to name our new FNG! Welcome K-Pub!

COT: “You don’t ever lose – you learn something and then just get that much stronger.” So, thank you to all those burpees for making us stronger today.